Chapter One: The Big Heat

London was in the grip of a summer that had arrived like a sumo wrestler stepping out of a sauna.

The sun was burning a hole in the sky and the air was so heavy it was lying down in the street. Even the pigeons were sweating. The few people who had the strength to go out looked like they were walking in slow motion but they were still going faster than the traffic which sat in a cloud of petrol fumes, the drivers half-asleep over their steering wheels. We lived near a canal and from the smell of it, you’d have thought the canal had decided to move in with us. The water was the colour of reheated coffee. Only the rats were happy. I could swear I saw a bunch of them sunbathing on the towpath.

It was the first week in August and I was beginning to wonder if I’d make it to the second. The school holidays had begun and I was trapped in a two-bedroom flat with my big brother, Tim. It was just a shame that we couldn’t afford two beds. I had a mattress on the floor which at least meant that I didn’t have too far to fall if I rolled over in my sleep. Not that there was much chance of that in the heat. One night I’d gone down to get a cold drink from the kitchen and I’d found Tim asleep in the freezer. His pyjamas were the colour of ice cream which was no surprise as the ice cream had melted all over them.

As you may know by now, my brother, Tim Diamond, was a private detective. At least, that’s what it said on his business cards. He’d ordered five hundred of them from a Polish printer on the internet. The good news was that they were cheap. The bad news was that the printer had spelled his name wrong and had made three mistakes in his email address. Try to contact Tim and you’d end up connecting to Jim Dimblond in an all-night tattoo parlour in Bydgoszcz.

And a Polish tattooist would probably be more helpful to you than my brother who was, without doubt, the worst private detective in the world. His last case had been three months ago and he’d just ended up going round in circles. OK, to be fair, the clues had led him to the Millennium Wheel in London but it had still been a difficult ride and I, for one, was glad to get off. Since then, he’d been earning extra cash as an Uber driver … though not much cash as he didn’t have a car. He’d tried writing begging letters but that didn’t work either as he couldn’t afford the stamps. So there we were, stuck with each other … in every sense if we got too close.

I remember that it was a Tuesday morning. That was the one that came after Monday morning although the two of them looked pretty much the same to me. We were sitting at the breakfast table staring at a miniature box of cornflakes that had come out of one of those variety packs.

“It’s still in the cow,” I growled. “There’s nothing left in the fridge, Tim. This is it.”

“OK. We’ll split them fifty-fifty.” He tore open the packet and began to count out the cornflakes. “One for you, one for me, one for you…”

We might have been there until lunchtime but just then there was a knock at the door which surprised me as I’d forgotten we still had a door. We’d sold most of the furniture, including my bed, to pay the rent. We didn’t really need the door. It had recently become unhinged but then so had Tim and he wasn’t going anywhere. Quickly, we cleared away the breakfast, then Tim threw himself onto the chair behind his desk. It was on wheels and I watched as it slid across the room and crashed into a bookshelf bringing two dozen volumes tumbling down. These were difficult times but Tim had refused to sell his Narnia books or his Just William collection. I wheeled him back into place, checked everything was all right. Then I opened the door.

It was a girl – and I knew at once that she was exactly Tim’s sort. I could already see his eyes widening and his ears turning red which was certainly more attractive that the other way round. It was as if he’d got his head trapped in the microwave oven. Again. My big brother wasn’t completely unattractive. He kept himself in shape even if the shape was a bit like a half-filled bin bag. But when an attractive woman came anywhere near him his entire bone structure seemed to collapse in on itself and he found it difficult to breathe. That was exactly what was happening now. As our new visitor walked into the room, I wondered if he’d throw up or explode. Either way, it was going to be messy.

And she really was beautiful. When I say she had “movie star” looks I’m talking about the sort of movies I was still too young to see. She had the sort of blonde hair you only see in a shampoo advertisement. When she shook her head, I could swear it moved in slow motion. Her eyes were Caribbean blue beneath eyelashes that could swat a fly. She was squeezed into a pair of shorts so short that she could have used them as a pocket handkerchief … if there’d been room for a pocket. Any shorter and she’d be under arrest. She was also wearing a cut-off T-shirt that showed six inches of stomach and a sweet tattoo of a flamingo that clearly hadn’t been done in a tattoo parlour in Bydgoszcz. Curiously, her earrings didn’t match. One was black and one was white. Maybe she’d got dressed in a hurry. She was carrying a crocodile-skin handbag and the way she held it close to her, I wouldn’t have minded being the crocodile. When she sat down, she crossed her legs like a professional dancer. She didn’t move. She flowed.

“Hello!” Tim squeaked. As far as I could remember, my brother was twenty-six years old but suddenly it was as if he was eight and a half. He was gazing at her like a dog in a toilet paper advertisement. “So how can I help you Miss…?”

“What a lovely name!”

Tim pointed. “You may have noticed my name on the door.”

“No, no! I’m Tim Diamond.” He gave her a wobbly smile. “So how can I help you, Miss Nightinjail?”

She ignored this. “I need help,” she said.

“Then you’ve come to the right place. You can rely on me one hundred per cent. If you don’t believe me, ask any of my clients. Start with the ones who haven’t been killed or hospitalized.”

“Who’s he?” Jane Nightingale had noticed me for the first time.

“What are you doing here?”

“I was about to ask you the same.”

“All right.” Suddenly she was serious. “My father has gone missing.”

Tim frowned. “How do you know?”

“Because I can’t find him. We were meant to have lunch last week. He didn’t show up. So I telephoned him. He didn’t answer. I’ve tried emailing and texting. Nothing!”

“What exactly is the relationship between you and your father?” Tim asked.

Jane stared at him. “I’m his daughter!”

“He lives in Bath. I rang his neighbours…”

Tim leaned forward. “And where do they live?”

“Next door! They told me the house was empty so I drove down the motorway to check on him. The back window of the house was smashed and it looked to me as if there’d been a struggle in the kitchen. There were broken plates on the floor and a kitchen knife stuck in the wall. I called the police and they sent someone round but I’m not sure they’re taking it seriously. Nobody’s seen him for days. He’s never behaved this way before. I’m quite worried about him.”

“What does your father do?” I asked.

“No. I’m telling the truth. He writes about computers. The history of computers, how they work … all that sort of stuff. He’s quite an expert in the field.”

“Why? Can’t he afford an office?” Tim asked.

“He has got an office. It’s in his house – in the Royal Crescent – but he also comes to London three times a week to work in the British Library. They haven’t seen him either. Nobody knows where he is.” A single tear trickled down her cheek.

“There could be a simple explanation,” Tim said. He was trying to cheer her up. “He could have been run over. He could have fallen into a river and drowned.”

Jane Nightingale took a deep breath. “I’m asking you to help me find him!” she exclaimed.

“And the last time you saw him, he was in the bath…”

“I don’t think Bath needs a plug,” Tim said. He swivelled round in his chair, realized he was facing the wrong way and twisted himself back again. “OK, Miss Hiking Trail. I’ll work round the clock to find your father for you and if he’s not round the clock, I’ll look somewhere else. Fifty pounds a day and I’m on my way to Victoria.”

“But the train leaves from Paddington!”

“Victoria’s my travel agent. What do you say?”

“Well, all right…” She opened the handbag and pulled out a wodge of fifty pound notes so clean she could have printed them herself. “I’ll pay you a week in advance,” she said. She counted out the notes: seven portraits of the queen which we certainly weren’t going to hang on the wall. Finally, she produced two slips of paper. “This is my mobile number. And this is my father’s address. His name is Alastair.”

“How do you spell that?” Tim asked.

“A-L-A…” she spelled it out for him. Then she closed her handbag and stood up. “You’re my only hope,” she whispered.

She left the office.

As soon as she had gone, Tim snatched up the fifty pound notes. “OK! We’re going out for breakfast and then we’ll pick up the train tickets,” he exclaimed. “Are you coming?”

“Shouldn’t you get out of your pyjamas first?” I suggested.

Tim looked down. He’d forgotten he was still wearing them. “Oh yes.” He blushed. “I’ll be right back!”

While he was gone, I opened my laptop and did a quick Google search on Alastair Nightingale. After all, if we were going to be searching for him, I thought it might be useful to know what he looked like. And there he was. He had a full page on Wikipedia with a list of his books: The Computer Code, Exploring Cyber Space, The Art of Algorithms. They all sounded thrilling. There was also a picture of him. He was in his fifties with glasses and the sort of ponytail that would have embarrassed a pony. He looked exactly as I’d expected: a computer geek.

And then I noticed the name on the book covers.

There it was, repeated three times. I looked up a couple of book reviews just to be sure. But there could be no doubt.

We’d just had a visit from a woman who claimed to be his daughter and who said she was desperately worried about him.

But she couldn’t even spell his name. 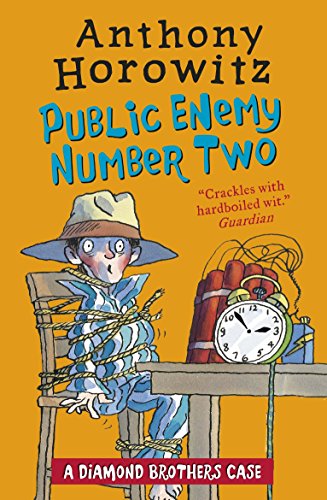 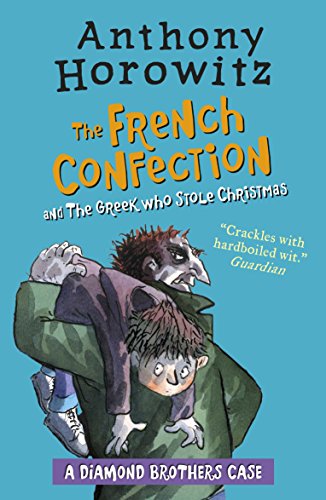 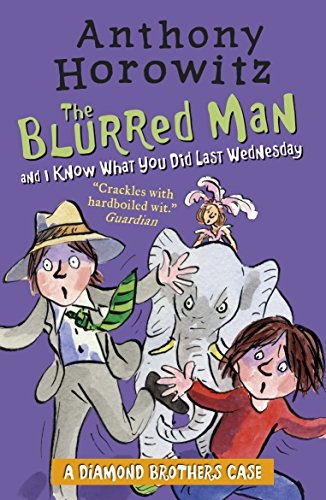 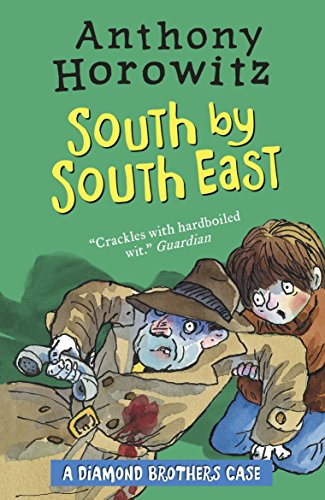 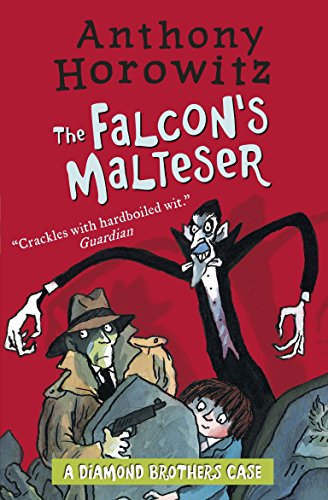